Hello! Please hit the follow button on the right for updates

I went to a Morning Star Advanced Prophetic Conference to check with the Lord some more on all that he has shown me, to see if I needed any correction on the details, just in case my information was incorrect or misinterpreted, on what California has coming to it in 2022. That was the whole purpose of my going, California. The conference started Thursday, but I arrived there at Morning Star Wednesday night and God did not waist any time in answering my prayer. That night, he answered me with  2 dreams connected back to back.

In the 1st dream, I was in a try out for a baseball team. I was a pitcher. Rick Joyner and friends were standing by watching us play, as in a try out. I took the mound to pitch and the first pitch I threw, nothing happened. On the 2nd pitch, I threw the ball and look over to Joyner and friends and they gave an approval of my pitch, that it was good, but it took a long time to get to the batter at home plate, like the batter was much longer from the pitcher's mound than normal. Finally, my pitch reached the batter and he hit the ball. The ball ricocheted off a bunch of square pillars, like 5 or 6 of them. I followed the ball off these pillars, caught it and it wound up being a golf ball. I tug the runner out and said, "you're out."

2nd dream - I'm now the batter. I'm up to home plate. The pitch comes in and I hit a long fly ball to deep right center field. I'm rounding 2nd base and look in the outfield. There was no fence in that part of the field and I saw kids a long distance away, scattering trying to get to the ball. I knew it was a home run and jogged home with ease. Home run.

Interpretation - I went to this conference to see if I needed correction on anything prophetic I had from the Lord, but just the opposite took place. I'm hitting a homerun in the Spirit on what I have because it is God who has given me what I have and have it correctly interpreted. I was good on playing both offense and defense.

The 1st pitch in the 1st dream, nothing happened. That was my meet up with Rick Joyner to try to awaken him to what's coming to California in 2022, in the book signing line, but he gets inundated by many people, so nothing happened. I went back in line to tell him because he didn't take me serious, he just brought to pass the 1st part of my dream, the pitch that nothing happened on.

On the 2nd pitch that was hit, I caught the ball, but it was a golf ball, smaller than a baseball and needing more precision than a baseball, showing what I have is more precise in prophecy than what Morning Star has concerning the California mega quake prophecies. I tug the runner out. The ball bouncing off the pillars are checks against their pillars in prophecy, one of which is Bob Jones prophecy of California going down after Japan has their mega quake. What I have is more precise in prophecy than the general description Bob Jones has in his prophecy. I know WHEN it's coming, thus, the golf ball, a more precise prophetic catch.

I dreamt I was on a football team playing defense. I was in a linebacker position. We were playing against an offense. The offense had the ball and hiked it, then ran the play to my left. They blocked me from getting to the runner, but I wasn't too worried about it because they clearly ran the play out of bounds to the left side. However, the play kept going and the runner and blockers took the ball all the way to the end zone for a touchdown.

A teammate said the boundary was beyond that white line and I had miss read the play from not knowing the rules. The boundary had 2 lines with cross lines in between them, similar in the picture below. My teammates said the outer was out of bounds, not the inner line.

I questioned the entire set of rules on that because the cross lines seemed to be self evident that the entire area was out of bounds. 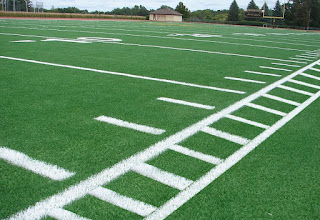 I'm playing defense, defending the truth in prophecy. The ball is the control of the word and the team running with the ball is an offense, offensive to the truth in end time prophecy. They are controlling the ball with a false narrative and in making their own rules to the game. They ran out of bounds, but faked it and kept the play going, even when they were clearly marked out of bounds and pretending to score.

These are the well known end time prophecy teachers who are controlling the false narrative in end time prophecy. They are clearly playing out of bounds and making their own rules to the game. They are controlling the narrative in big Christian media from their huge budgets, but are not getting supernatural Holy Spirit manifestations confirming anything they're saying in prophecy, like I and others are getting, but even some on my team (other Christians) are agreeing to their rules.

My team are the community of brethren I'm around who are not agreeing to the truth in prophecy and not even pursuing in the play, to defend its truth. My teammates in the dream showed they didn't really care. They just capitulated without question. They agreed to those rules of the false narrative and allowed the other team to think they scored.

We must call out these deceived teachers no matter how popular they are. Once the tribulation begins and they do not see rapture, their words will fall and ours will arise. They will no longer be relevant, but will try to fake it and all who have critical thinking skills will see them for what they are, unconfessed shooting stars, pretending to score.

Follow this blog for more prophetic updates as the Holy Spirit gives...

Father Yah, I pray you awaken your people to see, the light of what you've already revealed supernaturally in prophecy. Help them to decipher the difference between the truth and those deceived, in order to prepare them for the troubles ahead. Amen.