On 9/14/21, I dreamt I was seeing a mass manufacturing of a biometric ID battery pack. It had 4 cells, shaped like 4 double A batteries that people were going to be required to wear. 2 of the cells were batteries to power it. One cell carried everything of one's id, the 4th and last cell was a mystery. Then it moved to 3 cells, then down to 2 cells of the manufacturing. EOD.

Interpretation - The biometric ID is a plan the globalist have to track everyone, but their current plans will not come to pass because this 4 cell pack was a count down of time running out on the US as the global leader. Later, another kind of tracking people will form, but this one was a countdown from 4 to 3 to 2, showing years left. While so many "bible scholars" will be touting a mark of the beast with their tunnel vision of it happening gradually through our present system, world War 3 will end it abruptly and egregiously. It is a “bio-me-trick” to divide and divert. This countdown to the end of the US as we know here will then, become a new system formed thru Russia and China and then will be the true mark of the beast. This countdown has been shown to me in a few other ways. The United States has till 2024/2025.

There will also be a revolution in the US and much infighting. While everyone is diverted and divided in this infighting, the Spirit will direct many more people of God to prepare for Word War 3 by storing food and water and other necessities and getting to a safe, more rural place.

Lord Jesus, I pray you would awaken your people to see beyond the revolution and infighting and politics of now and what’s coming and help them to prepare for the hard times to come. The revolution and struggle is going to divert many into a trap of trying to save the nation, when you have already decided it's fate and judgment. Help us to endure and be prepared till you come shortly after , amen

The number 22 is also a biblically significant number. There are 22 letters in the Hebrew alphabet. In the original count of the old testament book, the Jews counted them as 22 books. There are 22 chapters in the book of Revelation and Tishri 22 is the last day on God’s sacred calendar, from Leviticus.

Both 7 & 22 are similar, meaning a time of fullness, completion, a severing or a cutting off.

Of course, everything God gives, the demons mimic, so expect to find new agers and others using the number 22 for their own messages, but we with the Holy Spirit have the true meaning of these biblically based numbers.

Not only in numbers, but as we know, God speaks thru the creation and thru events, even political and sporting events. He is not silent.

As Benjamin Franklin once said, “The longer I live sir, the more I see, God is in the affairs of men.”

Is it no wonder that as I was driving around town, in Asheville NC for a season, the Spirit of God upon me, lead me to see this on September 22, 2020. 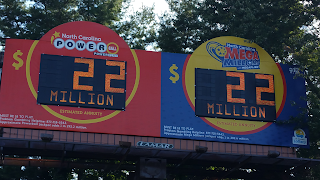 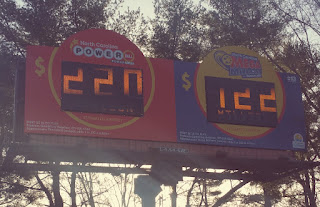 I didn't often pass through that part of town, where this billboard was, but on those days, I just happened to be driving through there taking care of “other business”. Why did I run into all these 22s? I believe God is showing me even more, signs of 2022. Is God into the lotto or gambling. Certainly not, but is merely using these numbers to compel us to awaken to 2022, to prepare us for the shock and awe coming and to help those in need at that time of the Shemitah.

I’m also finding other significant number signs and synchronicities God is speaking to me on, especially for the date September 12/13, 2022, which is in the midst of the every 7 year major event season, called the Shemitah.

On 9/12/21, I was visiting a church and the sermon was on  "great shakings". The Pastor must have used that phrase 100 times in his sermon.

There are 22 days between September 12 and October 5th.

9/12/2022 is weeks before the prophesied California mega quake, also aligning with the many testimonies of the Pacific Tsunami that’s suppose to cause mass wreckage along the US west coast and Hawaii, at that time. Are these number synchronicities signs to us, aligning with that time for tsunami?

Is there enough evidence here to compel us to keep a prophetic watch for that time to come? Along with several other incredible number signs God has shown me, I feel compelled to write this blog. Experiencing these synchronicities first hand, compels me to believe and to watch for tsunami at that time or close to that time to come.

Along with the 11 other major signs in the meme below, we have no lack of evidence to be on watch with all due diligence, for that Shemitah season to come. 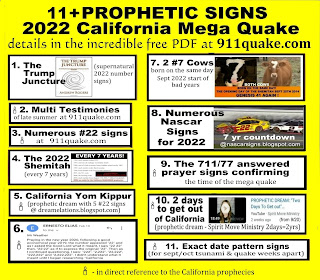